With a great line-up of speakers and topics, the March 2 WANTFA Crop Updates was an enlightening and informative afternoon in Goomalling. Around 40 growers and industry came along to the event which highlighted some of the key agronomical issues and research topics of the past year. Herbicide resistance and decay curves, soil amelioration, controlled traffic farming and crop pests and diseases were some of the topics covered on the day. 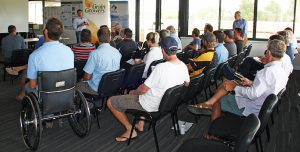 Geraldton Planfarm consultant Peter Newman spoke about the importance of managing herbicide resistance as a part of the Australian Herbicide Resistance Initiatives research. He said that while for most farmers, pre-emergent herbicides are still working, there were some cracks starting to show and warned that glyphosate resistance was coming.

‘There is a risk we could lose it all at once, but we want to try and keep the honeymoon alive’ he said.

Peter said farmers needed to lean on science to get the best out of herbicides for the longest time possible. ‘We want our herbicides to be like Keith Richards; live hard and die old,’ Peter said.

‘Even if you used trifluralin last year, mix it in with your rotated herbicide this year,’ Peter said.

He outlined the costs and outcomes associated with each different HWSM method including chaff carts, chaff deck, windrow burning and the Integrated Harrington Weed Seed Destructor.

When windrows are burnt, most of the nitrogen is removed and most of the potassium stays in the ash creating narrow potassium rich strips with less productive gaps.

Peter said there was also a huge amount of grain being lost out the back of headers, as machines get larger and faster. One test he did found that canola seed loss from the header could have accounted for $20-$200/h more profit with different harvester calibration and speed.

‘I encourage everyone to test and measure the header losses and share them with us, maybe simply slowing down will be the answer?’ Peter said.

‘When looking at the management of herbicides in dry and wet seeding conditions, what we are concerned about going early is that the dormancy of ryegrass hasn’t ended before the herbicide has broken down,’ David said.

The aim of his trial was to determine the decay curves of pre-emergent herbicides when dry seeding wheat to develop weed management strategies when sowing early.  Sakura®, Boxer Gold® and TriflurX® were sprayed onto various soil types, dates and moisture regimes over a two-year period.

Results indicated that Sakura®, Boxer Gold® and TriflurX® decay slowly under dry soil and can be applied early under these conditions. Under wet conditions decay of these herbicides was rapid and was highest under warm conditions (earlier application). Sakura had the slowest decay rates followed by Boxer Gold® and then TrilfurX®. Soil type had little effect on the decay rates. David’s urged growers to not rely on pre-emergent herbicides to give adequate control under wet conditions when sowing in April.

Department of Agriculture and Food WA researcher Craig Scanlan presented findings from a recent trial on spading water repellent soils. Craig said one of the biggest influences in the results was the season. After four years, they are getting an increase of up to one tonne per hectare in yield with spading, without any added nutrients, which Craig attributed to soil nutrients becoming more available after tillage, however in dry seasons, the different was nil.

Wayne Parker, from DAFWA in Geraldton spoke about the current excitement around deep ripping and controlled traffic farming and how to avoid wasting time or possibly making soils worse.

‘With the rain we have had recently, many are looking at pulling the deep ripper out. I’m here to say let’s not pull the cart before the horse,’ he said. ‘We have seen many going deeper and deeper with their ripping, but unless they aren’t going to drive on that paddock again, there’s not much point getting it too deep.’

Wayne said they want farmers to look at matching up the extra deep ripping with some form of CTF, managing wheel tracks and machine widths to avoid re-compaction.

‘CTF makes sense, topsoil slotting benefits subsoils and deep ripping gets roots to depth, but if you want to keep them there then we are going to have to not drive on it.’

Results from their deep ripping and CTF trails have shown at least two years of positive responses from that deep ripping.

‘Ripping results from Meckering, pale sands, ripped with a heliripper, had an over a 1t/ha response, it’s quite a significant yield response, and the farmer implemented CTF so we are likely to see the results continue,’ he said.

With eight different trial sites and soil types at six different areas of the State, there is two years’ worth of data with the main treatments being ripping with and without topsoil slotting.

‘We have seen a greater than 30% yield response in majority of the plots in the first year of ripping, Wayne said.

‘Munglinup, sand over gravel, didn’t see a huge response in the first year, keeping in mind we ripped the site to 600mm and you’d expect a fairly big response to that sort of action. Some other soils perhaps not responding as well to deep ripping, are York gum soils at Beacon, we saw a big response in first year but that didn’t continue. The other less positive was the morrell soil at Beacon, there are a couple of others, we saw a marked reduction in our yield response at Binnu, deep yellow sand, where we topsoil slotted we saw a reduction in our lupin yield, the lupins remained green a lot longer than usual, and it then dried off and they suffered.’

Wayne said some of the Eastern Wheatbelt’s sodic grey clay soils did not respond well to ripping.

‘As soon as you send the ripper in, you disturb that sodic layer and the natural chemistry of the soil, if there’s a rainfall event, it compacts itself again or even tighter than before you ripped it, so this is something for you to consider if you have that soil type,’ he said.

Wayne said that there was a lot to consider before deep ripping and most of the time CTF just makes sense. He encouraged farmers to head to www.ctfcalculator.org to start looking at how they can reduce paddock traffic. ‘At a recent workshop, a grower realised he was driving over 69% of the paddock with his current set up, now he has plans in mind to get that down, and with his next machinery purchase he will be going down to 40%, so that calculator is a great place to start,’ Wayne said.

DAFWA researcher, Stephen Davies spoke about the benefits of soil amelioration in the WA grain belt. Stephen said one of the biggest economic constraints facing WA growers was soils being water repellent, compact and or acidic. He outlined some of the research into soil constraint amelioration such as deep ripping, spading, mouldboard ploughing, topsoil slotting, lime and clay application and wetting agents.

‘Often farmers are dealing with multiple constraints at once like acidity, non-wetting, poor water and nutrient holding capacities and compaction as well as agronomic constraints,’ he said.

‘Deep ripping may alleviate compaction may not be enough to see improvements in non-wetting, and you may need to try something else.’

‘There were yield responses from claying alone, but once again the biggest response was from spading and there was also reduced frost damage,’ he said. 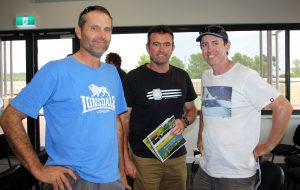 John Even, Glen Quartmain and Michael McGill at the WANTFA Crop Updates in Goomalling

‘Some of the methods are costly so to get the most out of it you need to hit multiple constraints.’

Stephen said that by targeting multiple soil and agronomic constraints at once, farmers will see larger and longer term benefits going forward. ‘There’s some opportunities to get big gains from all the options for managing soil constraints,’ he added.

For the full write-up on all topics from the day please see the Winter 2017 edition of New Frontiers in Agriculture.